Posted at 20:33h in Surfing by Aimee Clever
0 Likes
Share

It’s no secret that Nicaragua is a surfer’s paradise. The Legend of Nica’s all-day offshores and pumping beach break, points, river mouths, and reef setups have been out of the bag for some time now. Still, surfers who travel to Nicaragua find the crowd factor pleasantly sparse compared to other popular surf travel destinations like Costa Rica. You may have heard that Nicaragua surf is heavy and powerful compared to the surf of its neighboring countries, and this has some truth to it. However, visitors to our surf resort, Malibu Popoyo, find Nicaragua surf to be inclusive. There truly is a wave for every level of surfer, from first-timers who are taking lessons, to experts looking for cavernous barrels and carvable walls. Nicaragua is divided into three surfing zones: The north, home to the thunderous Boom beach break, central Nicaragua, home to Miramar and Puerto Sandino, and the South, where our Popoyo surf resort is located. The main surfing zones in the south are Popoyo and San Juan Del Sur. Both areas are wave-rich, but Popoyo is seen as a far more laid-back town compared to the nightlife centric tourism in San Juan Del Sur. When travelers come to Popoyo, they’re looking for one thing- waves. With more than 10 world-class waves located within 30-miles of our luxury surf resort, our guests are sure to find their fill. Continue reading below to learn about some of our favorite waves. 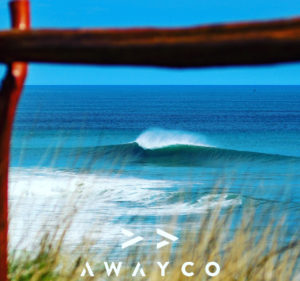 Popoyo, the wave, is a favorite among guests and locals. The wave at Popoyo is a picturesque, peaky reef break and sand slab that breaks off Playa Sardinas. Surfers at Popoyo can expect symmetrical a-frames that peel down the line creating carvable walls and the occasional head duck or barrel opportunity. Popoyo operates best at low tide or with an incoming tide. The wave will hold form to double overhead. The seabed is a combination of submerged reef and sand. The best swell for the wave is a south or southwest swell that meets the north easterly winds coming over Lake Nicaragua to form scenic, hollow a-frames.

Popoyo Outer Reef is the bigger, angrier brother of the wave that breaks off the shores of Playa Sardinas. Located a quarter-mile offshore, this beast of a wave attracts madmen and women who attempt to tame its towering form. While the wave may look poster perfect from afar, once you get closer, the many hazards of the outer reef, including sharp rocks, shallow boils, and heavy currents, reveal themselves. The outer reef can reach staggering heights with 20-foot faces and is a true expert only, big wave charger break. When you see images of heavy Nicaragua surf, chances are it’s Popooyo Outer Reef.

Playa Santana is a classic, pumping Central American break located just steps from Malibu Popoyo. This wedge-style beach break works from May through December and its waves are fast and hollow. During larger swells, Playa Santana turns into a barreling playground. This break works best from mid to high tide. Beware the scattered boulders spread throughout the sandy seafloor towards the rivermouth.  There is a white house you can line up in front of on the left side (if facing the beach from the ocean).  Enter and exit between the rocks in the sand.  On the right side, close to Rancho Santana, there is a channel to paddle out which is usually in front of where the panga boats are on the beach.  The boats don’t want to hit rocks, so going in and out there is generall safe. The waves peel better on that side of the beach, but it is often more crowded and many of the local rippers surf there.

Unlike the Mentawai wave of the same name, Lances Left in Nicaragua is a wave for every level of surfer. This playful, left-hand point break peels off a remote headland and therefore must be accessed by boat, which can be arranged through our surf resort. The journey is well worth it, for the break offers up long, leg-burning lefts that can reach hundreds of meters long during the right swell. The wave breaks on almost any swell direction and is protected from any harsh winds.  From November through May, its fun, longboardable and generally pretty empty.  The summer’s larger swells will bring more of a crowd.  It’s fun to go early in the morning and be the only boat there. 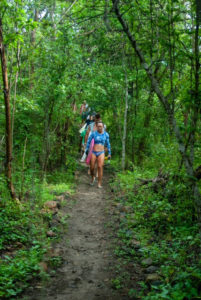 This is one of the best hidden gems around the area.  It can be accessed by boat, just down the way from Lance’s Left, or if you’ve got some time, by land.  By land is a favorite way to get there as you have to drive 45 miutes from the resort through local towns, dense jungle, and a shallow river, to end up at the land reserve where they hatch baby turtles.  After walking 10 minutes through the jungle, you will arrive on a pristine and beautiful beach with not a single soul around, no houses, no cars, no people – just you and the waves.  Chacocente only works when the wind is light.  Be sure to tell us upon arrival if you like to release hatching baby turtles as doing it at this pristine beach is one of the most special experiences.

Panga Drops is another well-rounded Nicaragua wave that can be enjoyed by surfers of all levels, during practically any swell and tide. The wave sits at the north end of Playa Colorado, just a short car or boat ride from our surf retreat. Panga can be frustrating as the wave has several peaks that work differently on each day.  It is generally best an hour or so before high tide and after.

Also located within the resort community and therefore best accessed by boat is the famous Colorados of Playa Colorados. Colorados produces what many consider to be the best barrel in the country, even this part of the world. The steady offshore winds from Lake Nicaragua help carve this wave into a hollow, racing barrel that works with practically any swell. This is your chance to shred a sand bottom barrel. 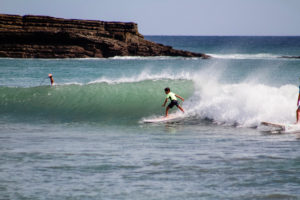 Magnific Rock is the protruding rock structure overlooking the break known as Beginners Bay. Beginner’s Bay is our neighborhood learning wave that’s located adjacent to Malibu Popoyo. The bay offers a sheltered section of the beach where the waves are mellow and user-friendly compared to the fierce neighboring waves. Whether you’re taking lessons with us, or just feeling the sport out for the first time on your own, Beginners Bay is the ideal break to find your feet.

There has been a problem with your Instagram Feed.