Posted at 20:21h in Surfing by Aimee Clever
0 Likes
Share

Nicaragua may be known as the land of eternal swell, sunshine, and all-day offshores, but like everywhere else in the world, Nicaragua has seasons. Unlike the Northern Hemisphere (and the Southern Hemisphere for that matter) we do not experience the typical weather patterns and seasons that many of us are accustomed to (spring, summer, winter, and fall). In Nicaragua, there are two distinct seasons, the rainy season and the dry season. This is because of the country’s close proximity to the equator. Equatorial countries are subject to tropical climates, in which seasonal changes are dictated by rainfall patterns, not sharp temperature changes. Additionally, Nicaragua’s nearness to the equator standardizes the day length year-round. Meaning that you can expect sunset and sunrise to be at similar times each day, no matter the time of year. Anyone who visits our Popoyo surf resort will tell you that Nicaragua has year-round sunshine and swell. So, how do Nicaragua’s seasons affect the surf? To find out more continue below!

When is the swell season? 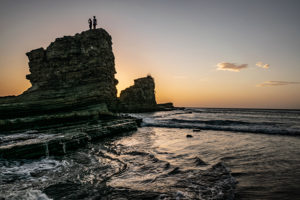 In the United States and Europe, we are used to two-distinct surfing seasons: swell season and not the swell season. During swell season in the Northern Hemisphere, winter storms form in the Arctic near Russia and travel across the Pacific. Those storms generate fetch as they move across expanses of open ocean, which in turn generates swell. That swell collides with the coastline of the continent in the form of breaking waves. In the summer, however, similarly formed swells that originate at the southern end of the earth, in the Antarctic, fail to travel as far as the United States and Europe. So, there is a clear distinction between the swell season and not swell season.

Nicaragua lies just above the equator, in what is still considered the Northern Hemisphere. Swell season in Nicaragua, and all of Central America, runs inversely to that of the United States and Europe. The traditional summer months of May, June, July, and August bring copious amounts of south swell to the shores of Nicaragua’s Pacific coast. This period lines up directly with Nicaragua’s rainy season. In the southern part of the country, where our Popoyo surf camp is located, the swell season brings all-day surf thanks to the Lake Nicaragua effect providing all-day offshore winds.

Surfing in the Rainy and Dry Seasons

Surfing in the rainy season is ideal for any and all hardcore surfers. During the rainy season months, each spot near our Popoyo surf camp lights up with swell. Additionally, full rivers flowing into the ocean form stable sandbars that create quality waves. This is when Nicaragua’s waves truly shine and visitors can expect to find deep barrels, carvable walls, and more waves a day than they could possibly imagine.

That being said, Nicaragua’s near-equatorial geographical location allows for year-round swell. So, the Dry Season (November, December, January, February, and March) has its share of surf as well. In fact, during the Dry season, the Papagayo winds begin to blow and turn Northern Nicaragua into a similar offshore playground to the south. In the south, the winds continue to blow offshore all day, but sometimes at alarming speeds. Still, morning and evening surf sessions with light offshore winds and fun waves are on the menu nearly every day. The dry season is a great time for beginners and intermediate surfers to hone their skills and progress on less critical waves.

Near our Popoyo Surf Camp, Beginners Bay, near Mag Rock, always has a user-friendly wave even during a large swell. Conversely, Popoyo will break with nearly any small pulse of swell. 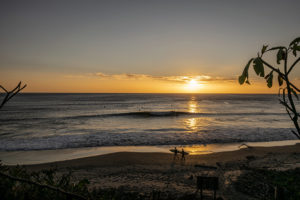 Traveling in the Rainy Season

Despite the misleading name, rainy season days still have plenty of sunshine. Travelers that visit Nicaragua during the rainy season can expect daily showers, usually for about an hour each afternoon. The rest of the day is filled with sunshine. While the dry season may be the more traditional tourism season in Central America, the rainy season has always attracted surfers. Heavy rains mean fuller rivers, which create epic river mouth waves. Additionally, the countryside is full of lush, green vegetation, the wildlife is active, and there are slightly cooler daily temperatures.

Traveling in the Dry Season

Travelers that visit the country during the dry season can expect blue skies and sunshine for nearly twelve hours each day. The offshore winds continue to blow all day, and manageable swell washes in from the vast Pacific Ocean. While there are still plenty of waves for those looking to get barreled, the dry season offers a variety of user-friendly and beginner waves for those surfers still learning and progressing. Additionally, the constant offshore breeze helps curb the effects of the slight increase in temperature, making each day of sunshine pleasant and perfect for outdoor activities.

Regardless of the time of year, you visit our Popoyo surf resort, you’re sure to have an authentic Nicaraguan travel experience while scoring great waves. We’ll see you in the water!